If you are considering a Namibia self-drive trip for the first time, you may be wondering what it’s like to drive in Namibia. Before my own Namibian adventure, I was very keen to understand what the roads would be like and what I should expect when driving in Namibia. I didn’t find quite as much information as I had hoped, so I wanted to write something I would have found useful at that time.

My husband and I drove more than 2,300 km across Namibia, so I wanted to share our experience and the lessons we learned along those long Namibian roads.

Now, this comes with a disclosure that I didn’t do the driving!  My husband drove every single one of those kms because I don’t have a driving licence – but I did do all the research and planned the route and I was right next to him feeling every bump along the way. I also wrote this post in collaboration with him, so this is based on first-hand experience from both of us.

NB. I have already written a suggested itinerary for spending two weeks in Namibia, so this post isn’t about how to spend your time on a road trip in Namibia. It is to share practical tips and information about driving in Namibia.

Why Do A Namibia Self-Drive Trip?

If you’re not sure whether a Namibia self-drive adventure is for you, here are three reasons I think it could be a great choice:

This was my number one question when I was planning my Namibia trip, so let me share some info and photos of roads in Namibia.  In general, I would say you should expect very uneven surfaces – corrugated gravel, chunky rocks, potholes on mountain passes and steep ditches to the side of the road sometimes. However, the conditions vary hugely depending on the type of road.

Facts About Roads In Namibia

Types Of Roads In Namibia

The major roads in Namibia (mainly designated as B roads) are tar or tarmac, and these roads are generally well-maintained, smooth and very easy to drive on. Unless there are roadworks, you’re also unlikely to have congestion on these roads – there won’t be much traffic outside the towns.

Examples of tar roads include the B6 between Hosea Kutako International Airport and Windhoek, the B1 from Otijiwarongo to Windhoek and all the way to Keetmanshoop.

Outside of towns and villages, the speed limit on tar roads is 120kmph.

Some of these roads are very straight and smooth. With little traffic, you might find yourself edging up to a speed that is higher than 120kmph, without realising – so do pay attention and stick to a safe speed. Even though there are few cars on the road, animals can step into the road with no warning, and it could be hard to avoid a collision if you’re speeding.

It’s worth knowing that the main cause of accidents in Namibia is not a collision with another vehicle: it’s a driver speeding a losing control of their car (or hitting an animal). On the B1, we saw baboons step into the road. Luckily they were not too close to us, and we were not going too fast, but it was a good warning that Namibia is full of wild creatures that won’t be looking out for your car.

Less major roads – and the majority of the roads in Namibia – are gravel roads. These are typically designed C or D roads. An example of a gravel road that many visitors will travel on is the main route between Sossusvlei and Walvis Bay – the C19.

These gravel roads can be tricky to drive on, and the surfaces vary a lot – even along the same road. At best, these can be a little bumpy and dusty. At worst, there can be potholes, sizeable rocks dotted around and corrugation. Corrugation is when the gravel settles into ridges going across the roads – and it can make driving on gravel roads especially bumpy.

The gravel roads were my least favourite roads in Namibia and there are a lot of them, often littered with the remnants of burst tires – a reminder to be careful!

We did end up with a damaged tire, which we think happened on the C27 road between the Namibrand Nature Reserve and Sossusvlei. I say ‘we think’ because it didn’t burst at the time of impact, but we noticed the tire looked deflated a day or two later. A mechanic at one of the lodges we stayed at found a slow puncture, which he thought would have been caused by going over a rock on the gravel road, so we changed it for one of our spares.

On forums, I’ve seen locals advise that you reduce your tire pressure a little when driving on gravel roads, to avoid the risk of a puncture.

The speed limit on gravel roads is 100kmph, though we were often going much slower due to the bumpiness of the roads.

There are some smaller roads in Namibia which are sand roads. These can be tricky even with 4WD.  Probably the most famous sand road is the one on the final bit of road into Sossusvlei, in the Namib desert, although you don’t have to drive it to get to Sossusvlei – there’s a shuttle will which take you over this bit of road

If you do end up driving on sand, the received wisdom is to reduce tire pressure so that there’s more surface area on the sand, reducing the likelihood of the wheels getting stuck.

If you don’t have 4WD, it’s probably best to avoid sand roads. This was my plan for our driving route around Namibia, but we did end up on a sandy stretch of road on the way to the Namibrand Nature Reserve. We took a wrong turn and ended up on a road that wasn’t in our plan. It was pretty sandy in one stretch, which led to the car slipping around a bit. Luckily, we didn’t get stuck, though! I think this was the D830, but I am not 100% sure.

The only salt road we drove on was the C34 that runs from Swakopmund up along the Skeleton Coast – and we loved this road! It was much smoother than the gravel roads, and therefore really nice to drive on.

However, I do know that these roads can be slippery when wet, so they may be tricker in the wet season. And again, the smoothness and lack of traffic on this road may tempt you to speed, but you should still be careful.

If you’re driving around Namibia, chances are you will have to go over a ‘mountain pass’. These aren’t always on actual mountains – many of these so-called mountain passes are roads which take you between the relatively high plateau area of eastern Namibia and the lower-lying areas nearer the coast.  Examples are the Spreetshoogte Pass between Rehoboth and Solitaire and the Kuiseb Pass, through the Kuiseb valley.

As they go over rough terrain, these roads can be bumpy and twisty. They are also typically narrower than other roads and there can be deep ditches on either side of the road, making passing other vehicles tricky – so be extra careful on these stretches of road.

Is It Easy To Drive In Namibia?

The honest answer is yes, and no.

Yes, it’s easy to arrange a self-drive trip in Namibia and yes, you don’t have to be super-experienced to do it. My husband and I had not been anywhere like Namibia before, nor had we driven on gravel roads before – and we made it!  We just had that one puncture, but other than that, we were fine.

But no, it’s not as easy as driving in many other countries, due to the prevalence of gravel roads, especially if you don’t have a 4WD.  In my opinion, whilst it’s not as easy, it is really rewarding to drive in Namibia – the scenery is just so spectacular!

To help you get prepared, here are some Namibia self-drive tips.

Tips For Hiring A Car

I hope this helps you plan your Namibia self-drive road trip!

If you have any questions I haven’t covered here, leave me a comment.  Also, check out my suggested itinerary for spending two weeks in Namibia. 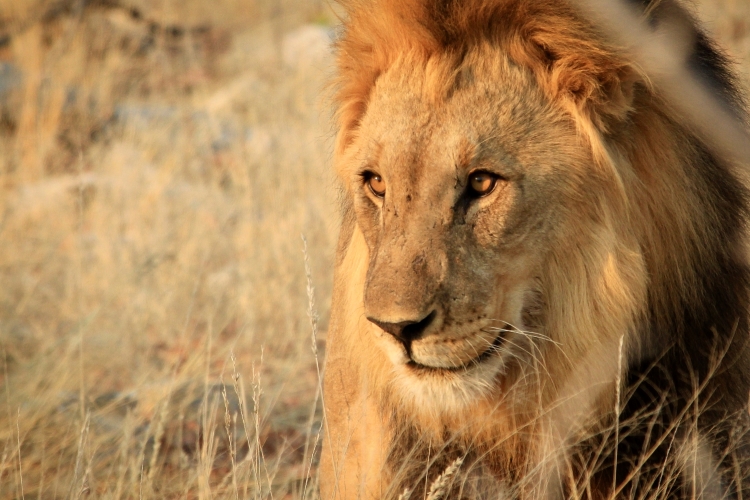 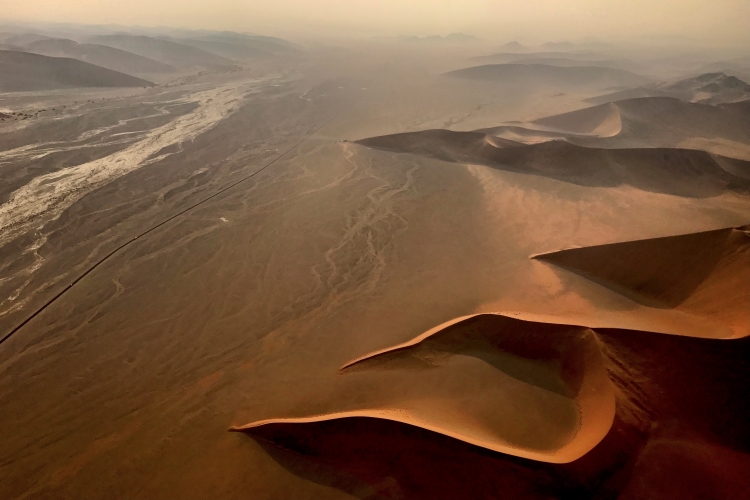 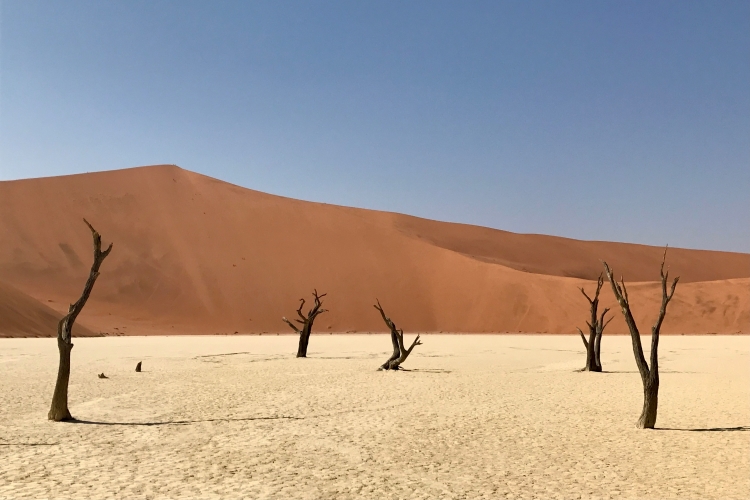 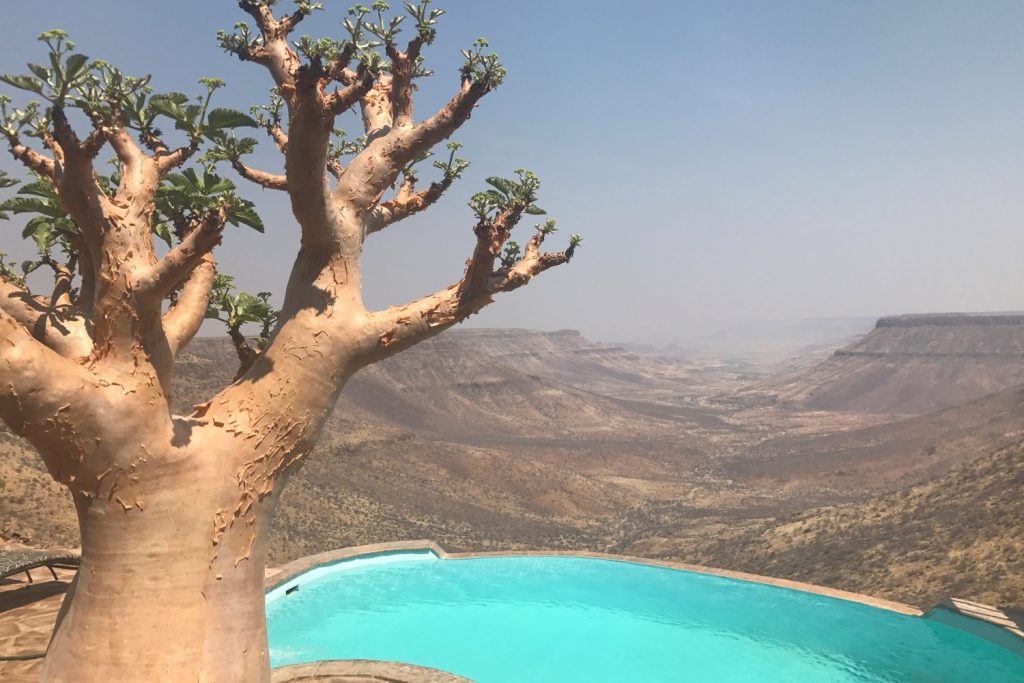 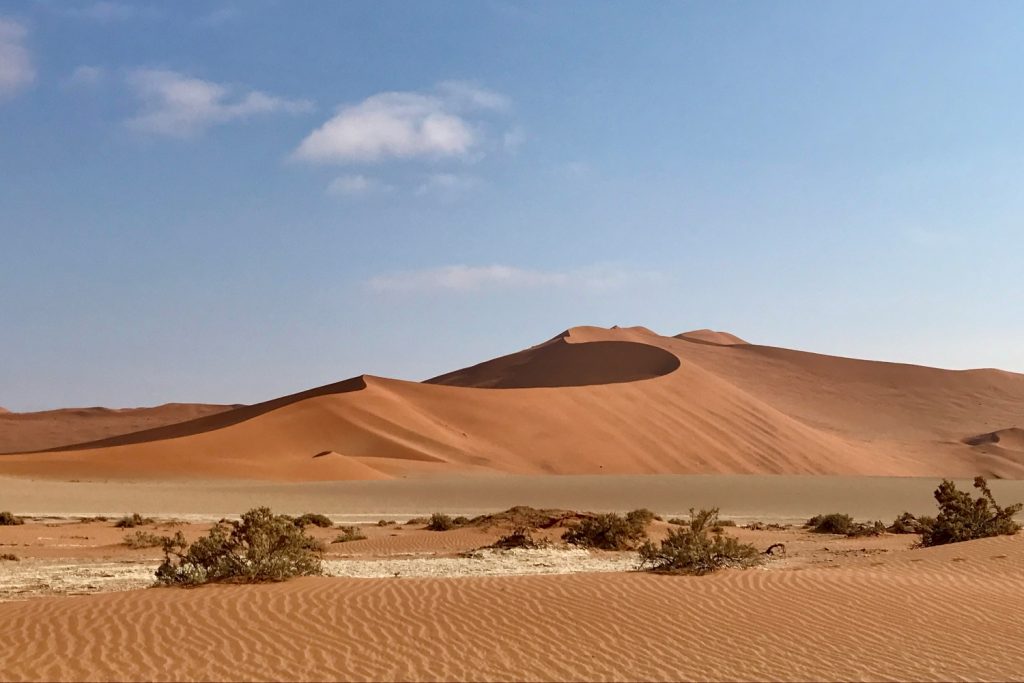 6 thoughts on “Driving In Namibia: Tips For A Namibia Self-Drive Adventure”